And The Wall Came Tumbling Down 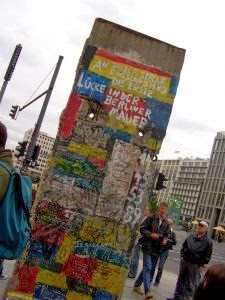 Today is the 24th anniversary of the fall of the Berlin wall. It was one of the most important events of modern European history and yet the full story of powerful prayer is rarely told.

The building of the Berlin wall was begun on 13th August 1961. It was erected by the German Democratic Republic (GDR), a communist state, to isolate West Berlin, part of the nation of West Germany but surrounded by the GDR.

As with the border between North and South Korea, the dividing of Germany into two states after the Second World War meant many families were separated and economic decline in the East made West Berlin and West Germany very attractive to those in the East.

Over the years many people tried to escape from the communist East to the West via the Berlin Wall. Few were successful, most were shot.

But the late 1980's saw Communism beginning to lose its grip across Eastern Europe and demonstrations began to occur in East Berlin. Ultimately the crowds breached the wall and guards stood by as thousands crossed into freedom.

This is established history. But behind the headlines is an amazing story of the power of prayer. Much of the story is told here by BBC's Peter Crutchley.

In 1982 Open Doors began a seven year campaign to pray for the nations under the heal of Communism.

Meanwhile, behind the Iron Curtain and in the same year, Christian Führer, pastor of St Nicholas Church in Leipzig in the GDR, began to hold prayer meetings for peace every Monday evening. Numbers were small to begin with because the atheistic government made it difficult for people to attend any kind of religious meeting.


In 1985 Pastor Führer put up a sign outside the church which remains to this day. It read, “Open to All”. Numbers began to increase rapidly as word spread about the prayer meetings for peace.

"On 8 May 1989, the authorities barricaded the streets leading to the church, hoping to put people off, but it had the opposite effect, and our congregation grew. There were beatings and arrests of demonstrators at protest rallies in Leipzig, Berlin and Dresden," the pastor said in an interview on the BBC’s World Service.

The general population began to respond with peaceful rallies in Leipzig and across the GDR. They became known as the Monday Demonstrations.


On 7 October 1989, the 40th anniversary of the GDR, President Honecker ordered in the police to close the church. A local newspaper ran an article which announced that the protests would be stopped Monday 9 October "with whatever means necessary".

"The church was visited by doctors who told us that hospital rooms had been made available for patients with bullet wounds. So we were absolutely terrified of what might happen," Pastor Führer said.

On 9 October 1989 about 8,000 people crammed into St Nicholas Church and other churches opened to help cope with the 70,000 people who had come to protest. After the service the pastor led his people outside to join the peaceful candlelit demonstration. He later said, "They didn't attack. They had nothing to attack for. East German officials would later say they were ready for anything, except for candles and prayer."

The following Monday the crowds were even larger. Two days later Honecker resigned and a month later the Berlin Wall came down.

It had taken seven years of consistent and faithful prayer to bring about the liberty of people from atheistic Communism.

On the day before Remembrance Sunday we would do well to consider that the weapons of Christians are not the weapons of the world but are still, "mighty in God for pulling down strongholds" (2 Cor 10:4).

Posted by Handsworth Wood Christian Fellowship at 10:24 pm No comments: